For my American week, I went with my comfort food, burgers and pie. This week I was assisted by my lovely grandmother who is an expert baker. I chose these foods because I feel comfortable making and serving them as American food.

For the hamburgers, I didn’t do anything fancy. Burgers are one of the main foods associated with America, along with apple pie and fried chicken. The hamburger was mad a global item around the late 1990’s. It is now considered fast food, but there are also ways to make a burger gourmet.

For my hamburgers, I just combined the ground beef with simple seasonings such as salt, pepper, and my personal favorite, ground cumin, which really gives the food a burst of taste. After that I shaped them into discs, and threw them on the grill for about 12 minutes. I don’t like anything on my burger except cheese, but other people will eat anything on their burgers, even raw onions!

Although it doesn’t look like much, it was bursting with flavor. One of my favorite things about burgers is they can be almost anything. The meat soaks up any spice you put into it, so a burger can become whatever it wants. My family loves burgers, so we do them at least three times a month. They are easy, yet delicious.

For my apple pie, I had the assistance of my lovely grandmother. She is an amazing baker and I was lucky she was in town while I was making my pie. This is the recipe I used :

The pie crust, which we made separate, was just a simple pie crust recipe with 1/3 of the butter switched with Crisco. We set aside the pie crust and began peeling the apples, which was a mess and we got apple peels everywhere.

When the pie crust was done we took it out and cut it into 3 equal sections. I rolled the pie crust out into an oval, so my grandma had to help me return it to a circle like its supposed to be. when we finally got a circular pie crust, we transferred it to the pie pan and filled it with apples. We overflowed the pan to create a cute lattice work on the top.

For the lattice, we took the remaining two pieces of crust, rolled them out, and cut them into strips, which we weaved onto the top. The final result was amazing and far better than I had first planned, and after about an hour of baking the pie was odne, and it was fantastic. 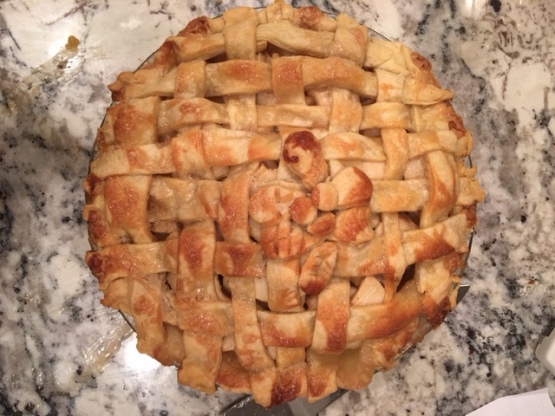 We served the pie with ice cream and the whole family loved it.

The American culture hasn’t been around very long compared to other places, but it still has emerged with some very good food. As America continues to grow, I’m sure its culinary finesse will increase tenfold.